H.E. Ambassador Vladimir Chizhov is Permanent Representative of the Russian Federation to the EU

Throughout the years H.E. AmbassadorChizhov has worked both in Russia at the Ministry of Foreign Affairs as in countries abroad, including Greece, Cyprus and Austria. He was Deputy High Representative for the Bosnia Peace Implementation in Sarajevo, and Russian Special Representative for Cyprus and later the Balkans. In 2000 he was awarded the diplomatic rank of Ambassador Extraordinary and Plenipotentiary. Before being appointed Ambassador to the EU in 2005, he was Russia’s Deputy Minister of Foreign Affairs.

He will address the audience on EU-Russia relations.

Registration is required via the online Event Manager before  November, 18. 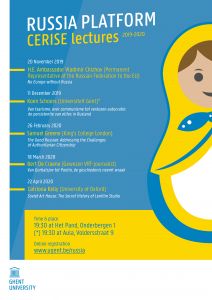